I CHOOSE A FAMILY OF PHYSICIANS
TO KEEP MY FAMILY #1.

I CHOOSE A FAMILY OF PHYSICIANS
TO KEEP MY FAMILY #1.

A Team on My Side

It began in June 2018 with a missed phone call that I didn’t want to return. I had just had my annual mammogram at the Orlando Health UF Health Cancer Center Breast Care Center. I saw that I had gotten a call from them, but I was just starting my vacation, and I assumed it wasn’t anything important, so I didn’t call back. Because of my family history, I had gotten my first screening mammogram at age 35. Now, at age 41, I assumed they were just calling to tell me that they had seen some calcification, as had been the case previously.

After returning home, and missing a few more calls, I finally called back. They told me they saw something suspicious and wanted me to come back in for additional imaging. At first, I resisted, thinking that it was just calcifications and that I really didn’t have time to go back in. But they said, “We really would like you to come back.”

I had additional mammography views and an ultrasound done. The radiologist came in to talk to me and told me that they had found a mass. I was still in disbelief. Because I had been so resistant so far, they made sure I scheduled a biopsy before I left the office that day. I had a biopsy done the following week and got the results within a couple days. I had breast cancer. My gynecologist, Dr. Jessica Vaught with Orlando Health Winnie Palmer Hospital for Women & Babies, went over the results with me and arranged for a referral with an oncologist.

I decided that I wanted to see Dr. Regan Rostorfer, a hematology and oncology physician who specializes in breast cancer, with Orlando Health UF Health Cancer Center. I have been a team member at Orlando Health for eight years, and I had worked in the same department as Dr. Rostorfer a few years earlier. So, there was a comfort level there because I knew him. Within just three days, I had my first appointment.

Based on the size of my tumor, Dr. Rostorfer scheduled me to see a surgeon. I chose Dr. Marc Demers, a general surgeon with Orlando Health Medical Group Surgery. He had performed my gall bladder surgery 10 years prior. Again, there was a comfort level with him.

Dr. Demers explained to me that I had triple-negative breast cancer, meaning that my cancer tested negative for estrogen receptors, progesterone receptors and excess HER2 protein. Triple-negative breast cancer is typically treated with a combination of surgery, radiation and chemotherapy, and my cancer fit just within the guidelines for having chemotherapy before surgery, which  Dr. Demers said could be a lumpectomy. At my next appointment with Dr. Rostorfer, he agreed, saying, “Triple-negative is an aggressive cancer, so I like to fight it aggressively.”

Before I started chemo, I attended a chemo class that went over what to expect. When I got home, a package had been delivered. It was my Patient Resource Guide. At first, it was a shock, and I didn’t want to look at because it made it all real. But in the long run, it was a great help. It’s like a manual for cancer and included everything about my specific cancer, including my diagnosis, stage, treatment and my care team.

I tend to be a worrier, and I always had a lot of questions. Dr. Rostorfer could always calm me down, just from his demeanor. He influenced me so much with his positive energy. He would say, ‘You’re going to do fine; we’re going to beat this.’ That always stood out to me, that throughout my journey, the doctors and nurses used the word “we,” not “you,” when they talked with me. So, I never felt alone; I always felt like I had a team fighting with me. And my two kids were a great help, too. They wanted to have an active role in my treatment, and would help with my medications, and just taking good care of me.

At one of my appointments, Dr. Rostorfer asked me to make him a promise that when I started seeing my hair fall out, to shave it off. Don’t wait. When I asked why, he said that he has seen patients try to hold off for as long as they can and it just puts them in a depression, seeing clumps come out. So, I promised that I would do that, and I did.

Within only three weeks of being diagnosed, I had my port placed and was starting chemotherapy. While I was undergoing chemo, Dr. Rostorfer recommended that I have genetic testing, saying, “You’re 41. I need to know why you have such an aggressive cancer at such a young age.” It came back positive for the BRCA1 gene mutation.

Because my cancer was triple negative and I had the BRCA1 gene mutation, Dr. Rostorfer recommended a double mastectomy rather than a lumpectomy as my best option. I had my last chemo on November 29, 2018, and on December 20, I underwent a double mastectomy. My lymph nodes were clear, so Dr. Richard Klein, a surgeon with Orlando Health Aesthetic and Reconstructive Surgery Institute, came in right after Dr. Demers to begin the breast reconstruction process, putting in the expanders and drains.

I had decided that, because of the BRCA1 mutation, I also wanted to have a hysterectomy. So, in February of 2019, Dr. Vaught, a specialist with the Orlando Health Winnie Palmer Center for Advanced Gynecology and Minimally Invasive Surgery, performed a laparoscopic hysterectomy.

All throughout, I’ve had an amazing team of doctors, all working together through the cancer center to provide me with the best possible care, with great collaboration and compassion. I love that.

Now, as I prepare for the next step of reconstructive surgery — I am so grateful for all the care and support I have been given, and I look forward to the future together with my friends and family. 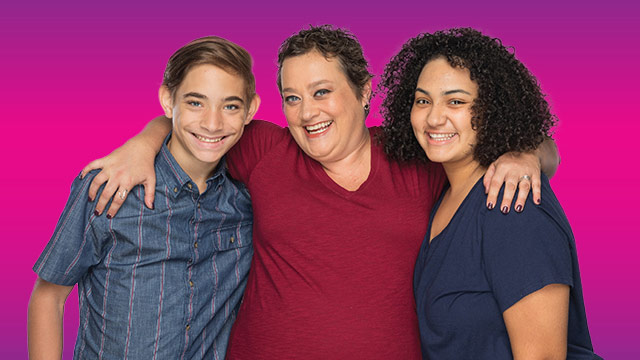 What always stood out to me was that throughout my journey, the doctors and nurses used the word “we,” not “you,” when they talked with me. So, I never felt alone. I always felt like I had a team fighting with me, working together to provide me with the best possible care.