WE CHOOSE A TRUSTED TEAM
FOR SPECIALIZED CARE.

WE CHOOSE A TRUSTED TEAM
FOR SPECIALIZED CARE.

A Star is Born

One night during her pregnancy, Alex was praying and looking into the night sky. A shooting star blazed across the horizon and she was immediately filled with inspiration. She knew she and her husband, Bill, would name their daughter after the woman of faith from the Old Testament whose name means Star. And sure enough, in February of 2011 their little star, Esther, was born. What they weren’t aware of was just how special Esther would be.

Living as missionaries in Mexico, and having a very limited budget, the couple elected to forgo testing for possible birth defects during their pregnancy. Working at an orphanage for handicapped children, they grew to love and appreciate people with physical and mental challenges, so whether their child had disabilities or not didn’t matter to them. As it happened, Esther would be born with multiple abnormalities and their time at La Mision Para Los Niños in Carmen Serdan, Mexico perfectly prepared them for what was ahead.

Esther was born with Micrognathia (a condition where the lower jaw is undersized) and severe upper torso bone abnormalities, which would eventually cause spontaneous spinal fusion, over 100 degrees of Scoleosis, and oxygen dependancy. She would also be dependent upon a tracheostomy tube (trach). Finally, Esther was diagnosed with Cerebrocostomandibular Syndrome (CCMS), an extremely rare condition in which only around 60 cases have been discovered since the first diagnosis in the 1960s. The Beckman’s plight of finding good doctors and specialists for Esther began in Oregon, their home at the time. They had mixed success in their search, and initially Esther thrived in spite of her difficulties. But at six months old, her condition worsened. Undaunted, the Beckmans had faith their little light would shine.

The Beckmans found a number of possible caregivers equipped to help Esther in Central Florida. In July 2013 not long after their move to Florida, Esther’s trach came out during the night. An ambulance ride and two hospital transfers later, they found Dr. Joshua Gottschall who has become Esther’s permanent ENT. At his recommendation, the Beckmans were able to find two surgeons at Orlando Health Arnold Palmer Hospital for Children to help with Esther’s other needs: Dr. Ramon Ruiz, a pediatric craniomaxillofacial surgeon (facial surgeries including the mouth, jaw and skull), and Dr. Jose Herrera, a pediatric orthopedic surgeon. The Beckmans were pleased to find the three of them made a great team. Alex and Bill connected with Dr. Herrera and talked through Esther’s conditions and her healthcare history. Contrary to physicians who they felt were either too confident or too anxious to properly care for Esther’s special situation, Dr. Herrera was exactly what they were looking for. They recall their family’s start with the team at Orlando Health Arnold Palmer as the moment when Esther’s care completely changed.

The Orlando Health Arnold Palmer team shared a plan for Esther to have a Halo placed and use a traction system before surgically inserting a growth rod to correct her scoliosis. The traction system is used to correct spinal issues and posture by supporting the neck and shoulders and relieving pressure on the lower body. This would allow Esther’s body to stretch over the course of a few months before placing rods to stabilize her body in a more upright position.

The traction system worried the couple at first, but they decided it was best as Esther’s physical health worsened. After dismissing their initial fears and praying for a positive outcome, the Beckmans were incredibly excited about Esther’s new treatment plan and its potential to change her life. Esther had a Halo surgically placed and immediately began traction afterwards. They were required to stay in the hospital as Esther’s team monitored her progress. That holiday season, Esther lit the Christmas tree alongside Orlando Health Arnold Palmer President, Cary D’Ortona. This is one of the Beckman’s favorite Christmas memories. Dr. Herrera and his team even allowed Alex and Bill to take Esther home with the traction system to enjoy the holiday as a family.

After using the traction system for just a few months, Esther’s spine curvature began to decrease significantly. The Beckmans thank Jesus for bringing the Orlando Health Arnold Palmer Hospital team into their lives and are amazed with how much success was achieved with the traction system. Esther went from being sick frequently, barely walking, and on oxygen to running around and having a better quality of life. Her spine curvature is now considered a mild curve.

The Blessing They Needed

Alex and Bill are so grateful that they found physicians who took the time, care and resources to fully understand Esther’s well-being. They see the Orlando Health Arnold Palmer Hospital team as a blessing from God and plan to stay in Florida as long as Esther needs regular care. This is the team they trust to deliver the most individualized experience. They’re thankful for Orlando Health Arnold Palmer’s willingness to customize care to their family’s needs.

As for Esther’s health currently, the Beckman’s are hoping to have her tracheostomy tube removed this year. She will have growth rods to correct her scoliosis until she’s 14 years old and an upcoming back surgery this summer.

Alex and Bill are driven by Esther’s happiness and their trust in God to continue on this healthcare journey. They believe that Esther truly is a shining star and that her uniqueness is a gift from God that serves a meaningful purpose. Her life has shaped their own in so many ways and they hope their testimony comforts and encourages families with special needs children. They don’t know where they would be without Esther and guidance from the Lord. Even though Esther is still just a child, The Beckmans are amazed with her faith and hope as she trusts in God, and how that has brought significant progress throughout her time with Orlando Health Arnold Palmer Hospital for Children. 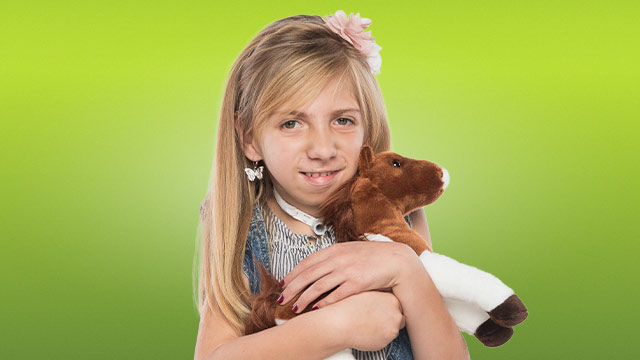 Care Unique to Her

Every single time, her care is very specific and unique to her and that’s huge. That’s what every hospital promises, but actually being a witness and seeing it happen and what it does to the parents... It’s such a comfort to know that’s happening. I’ve seen it, I felt it. I can trust that when she goes, she really is in good hands.