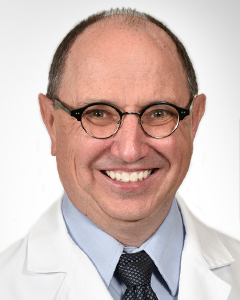 Daniel J. Buchholz, MD, serves as the chairman of radiation oncology at Orlando Health Cancer Institute, and is a team member of the Breast Care Center and Gastrointestinal Cancer Clinic. He is board certified in radiation oncology. Dr. Buchholz is trained in proton therapy, a new advanced treatment instituted at Orlando Health in 2016. This therapy is only available in a few cancer centers nationwide.

Dr. Buchholz earned his medical degree from New York Medical College and completed a general surgery internship at Bethesda Naval Hospital in Maryland. He later served as chief resident in radiation oncology at the University of Texas MD Anderson Cancer Center in Houston, where he remained on staff until joining Orlando Health Cancer Institute in 1995. He has helped transform Orlando Health Cancer Institute from a community cancer center to a nationally recognized, high-quality cancer program.

Dr. Buchholz has been named one of Orlando’s best and top doctors by Orlando Magazine for 14 consecutive years. He is a member of the American Society for Radiation Oncology and the American Medical Association.

Information will update every 5 minutes. ER Wait Times are approximate and provided for informational purposes only. Estimated Wait Times as of: Monday, December 6, 2021 3:28 PM