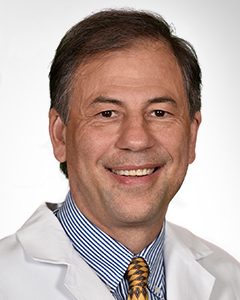 Dr. Mamounas has authored and coauthored more than 300 abstracts, peer-reviewed manuscripts and book chapters and has given numerous lectures at national and international meetings. As part of the National Surgical Adjuvant Breast and Bowel Project, his clinical research has been funded over the past 20 years by several National Cancer Institute grants and more recently by a Komen for the Cure grant.

He has served on the editorial boards of several oncology journals and is a past associate editor of the Journal of Clinical Oncology. He has received several awards and distinctions and has been listed in The Best Doctors in America consistently since 2001. He is considered one of the nation's best cancer physicians.

National and Kapodistrian University of Athens

Information will update every 5 minutes. ER Wait Times are approximate and provided for informational purposes only. Estimated Wait Times as of: Thursday, September 23, 2021 10:39 PM