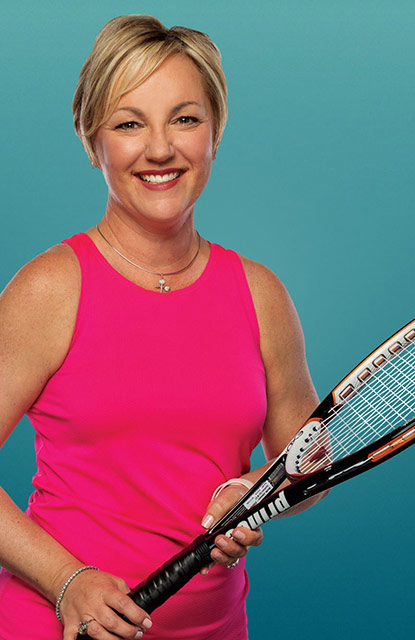 Getting Back on the Courts.

I’ve always led an active life. I was a competitive cheerleader and gymnast all through middle and high school and started playing in a competitive tennis league about six years ago. I also have two girls in middle school, with very full schedules, who keep me very busy.

About two and a half years ago, I noticed my hip joint slipping — almost feeling like I was going to lose my footing. Then my knee also started to hurt, and it got to the point where I was even limping. Simply walking became a problem. So, I decided it was time to see an orthopedic specialist to find out what was going on.

I met with Dr. Daryl Osbahr, with the Orlando Health Orthopedic Institute Orthopedic and Sports Medicine Group. He saw some compression in the joint, where some of the cartilage was beginning to wear away. I learned that some of my issue was partly because of hip dysplasia, a condition I was born with but unaware of, where the hip socket doesn’t fully cover the ball portion of the upper thighbone. There wasn’t a lot of coverage for the ball coming out of the femur joint. And because I had been so active, and involved in sports that put a lot of pressure on the joints, the cartilage was starting to wear. My mother has also had two hip replacements and a knee replacement, so genetics was also in play.

Because I was young and not wanting surgery, we decided to try physical therapy (and two cortisone injections). After about eight months, Dr. Osbahr took another look. My condition was worsening; now there was no cartilage left in the joint. I was dealing with bone-on-bone arthritis, and the pain also had gotten worse. At this point, I had stopped playing tennis because of the pain, and it wasn’t just my hip that was hurting. Now the pain was all the way down my leg to my ankle and foot. Dr. Osbahr told me that if I wanted the pain to go away, and to continue doing what I loved to do, I needed to have a joint replacement. He suggested I schedule surgery soon. I said, “I’m 45 years old.” I didn’t think this happened to people my age.

I then sought out Dr. Jeffrey Petrie, an orthopedic surgeon with Orlando Health Orthopedic Institute Orthopedic and Sports Medicine Group who performs joint replacements. My physical therapist had told me about Dr. Petrie, a bright, young doctor with fresh ideas and approaches. I was secretly hoping he may have something else to offer me other than joint replacement surgery. He took a set of X-rays, looked at them and said, “Okay, when do you want to do surgery?” That was October 2018.

I had never had surgery before. I had never had anesthesia. I had never been in a hospital except to have my two children. It was like going from zero to 150, fast. But, I was done dealing with the constant pain; I had travel plans coming up in January that I needed to be recovered for; and Dr. Petrie was very reassuring and had come very highly recommended, so I asked if I could get it done in the next month. My surgery was scheduled for November 5.

At my pre-op appointment with Dr. Petrie, he spent a good amount of time with my husband and me, talking over things and showing us X-rays so I could really have a clear understanding of what was going to happen. He had a lot of really good information, but I think more than anything he was just really personable and easy to talk with. When he talked to me, he looked at me. He looked right at me. He didn’t talk down to me.

For my hip replacement surgery, Dr. Petrie recommended a direct anterior approach, which is a minimally invasive procedure that uses advanced technology, including X-ray and computer navigation to see where to implant the artificial joint. And because the surgeon does not have to cut muscle with this approach, patients generally have less pain, a faster recovery and a more natural feeling with the new hip joint. (Click Here for more information on anterior hip replacement.)

I had a little hiccup getting cleared for surgery because my EKG was abnormal, but I was able to get in the see a cardiologist with Orlando Health Heart Institute Cardiology Group quickly. They did not find any issues, so I was cleared. In fact, the cardiologist called me herself to let me know that everything was good. I was very impressed by that. She took the time to pick up her cellphone and call me. She didn’t have to do that, so it was nice.

When I attended the pre-surgery joint class, I was the youngest person there — by many years. People gave me some questioning looks, like they were wondering what I was doing there. The class was great though. They give you a lot of good information, are very reassuring, and really get you prepared for the surgery.

Because Dr. Petrie does his surgeries at Orlando Health Dr. P. Phillips Hospital in west Orange County and we live on the east side of Orlando, my husband and I were able to stay at the Perry Pavilion, right on the Orlando Health Dr. P. Phillips campus, the night before the surgery. It was lovely, and they were very accommodating. It made a very early morning check-in much easier.

I had surgery in the morning, and they had me up and walking the halls several times that afternoon. I was in the hospital one night, with a hip “boot camp” the following morning before my discharge. In spite of my apprehension and fear, the whole experience was wonderful. The facility was beautiful. The care was top-notch. I mean, it didn’t not hurt, but everybody was very caring, very easy. I didn’t ever feel intimidated by anybody. I felt very comfortable and cared for the whole time, and confident in what they were doing because I knew what to expect, and I knew that it was going to be okay. I received a handwritten note from Dr. Petrie that was in my room after surgery that read, “Look forward to seeing you on the courts again soon.” This meant so much.

My Orlando Health Home Care nurse and physical therapist were both great. I didn’t have to worry about scheduling anything. They contacted me for my follow-up care and I just had to be there and follow through. That eases your mind a lot. After three weeks, I began my rehab at Orlando Health South Seminole Hospital. The facility is really nice, the equipment is great and the team there is amazing. They’re very kind, very compassionate. My therapist, Todd, was really, really helpful. He knew I wanted to get back to tennis, and so he tailored my therapy to achieve that goal. Now, I’m back playing tennis without any limitations and without any pain.

I didn’t think this could happen to people my age, but it can happen at any age. The good news is, it’s fixable. It’s funny, when you go through something like this, you begin hearing a lot about other people in their 30s or 40s who have been in the same situation. Fortunately, where we are today, the replacements that they’re using can last longer. Dr. Petrie told me I could have probably 25, 30 years with what I have. It’s nice to know that you can count on it lasting, even with an active lifestyle like mine.

From Fear to Fearless

In spite of my apprehension, fear and shock at being faced with having joint replacement surgery, the whole experience was truly worth it. The facility was beautiful. The care was top-notch. I mean, it didn’t not hurt, but everybody was very caring and professional. I felt very comfortable and cared for the whole time, and confident in what they were doing because I knew what to expect, and I knew that it was going to be okay.