From Seeing Stars to Running Marathons

Rachel Robbins was attending nursing school in Alabama when some strange things started happening to her last fall. First, the 27-year-old avid runner began seeing “stars” and developing migraines. Then, her vision got worse — people’s faces were fuzzy and letters on the left side of signs were missing.

Accustomed to pushing through her pain and too busy with school to take a break, Robbins kept going for months until one night she awoke with such a painful migraine that she finally decided she needed help.

The next day, she saw her family doctor who referred her to an ophthalmologist. An MRI scan revealed that Robbins had a brain tumor the size of a lime. Surgery followed at the nearest hospital, an hour away from her small town. Test results showed it was a glioblastoma tumor, the most invasive type of brain tumor because it can grow very quickly and spread to other parts of the body. Standard treatment for glioblastoma is radiation and chemotherapy following surgery to try to kill any remaining cancer cells.

Robbins’ next step was guided by a friend back in Orlando who told her about proton therapy at Orlando Health UF Health Cancer Center. Compared to traditional radiation, proton therapy provides more precise radiation treatment with minimal damage to healthy cells surrounding the target area.

“That definitely was something I wanted to be a part of,” says Robbins, “because I wanted to get the best care I could.”

Her treatment at the cancer center was led by neuro-oncologist Dr. Nick Avgeropoulos and radiation oncologist Dr. Naren Ramakrishna, who leads the Marjorie and Leonard Williams Center for Proton Therapy.

“Dr. Ramakrishna really has been a huge advocate for me,” says Robbins. “Because I had recently gone off my parents’ insurance, I had an unconventional type of insurance that was more difficult to work with. Dr. Ramakrishna played a key role in enabling me to get the proton therapy. The Orlando Health Foundation also helped.”

In March, Robbins began six weeks of proton therapy, five days a week. “Honestly, going for that was my favorite part of the day,” she says. “Each session was about 15 minutes, and the proton beam would hit me at three different angles.”

“I think that we came through for her with a terrific treatment,” says Dr. Ramakrishna. “Rachel really represents what our mission is about. We're trying to provide advanced, state-of-the-art treatment that delivers the best outcomes, preserves quality of life and offers hope to patients like her.”

Today, Rachel is doing well and returns to Orlando Health UF Health Cancer Center every other month for checkups. She’s looking forward to returning to nursing school and running in the New York City Marathon next November on the 2020 National Brain Tumor Society team.

“I’ve had a great experience,” Robbins says of her treatment at Orlando Health. “Dr. Ramakrishna and Dr. Avgeropoulos are wonderful. They not only treated me and told me this is what you need, they taught me about it.

“When you know about your situation and you know what's going on,” she says, “you feel like you're a little bit more in control of things.” 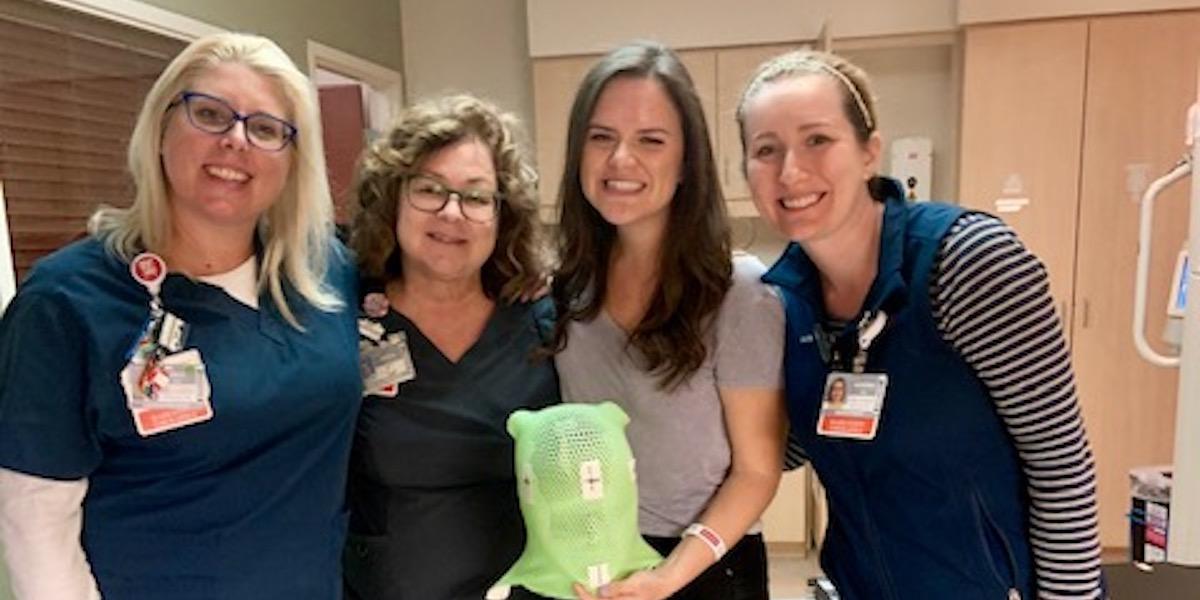 Having treated its 500th patient since opening the proton therapy center in April 2016, Orlando Health UF Health Cancer Center has plans to expand its proton therapy program with new technology that advances its capabilities even further.

“We're looking at a technology called intensity modulated proton therapy, also known as pencil beam scanning proton therapy,” explains Dr. Naren Ramakrishna of Orlando Health UF Health Cancer Center. “That, together with next-generation imaging technology, will allow us to treat more tumors, in different parts of the body, and to treat them with even better precision and sparing of healthy cells.”

Dr. Ramakrishna, who leads the Marjorie and Leonard Williams Center for Proton Therapy, is working with the Orlando Health Foundation to garner funding for the new technology. To learn how you can support the Foundation and its mission, visit OrlandoHealthFoundation.com.

Information will update every 5 minutes. ER Wait Times are approximate and provided for informational purposes only. Estimated Wait Times as of: Friday, March 5, 2021 7:08 AM