How to Diagnose GERD

If you have a pain in your chest, you may wonder — is it your heart? Or could it be GERD? Gastroesophageal reflux disease is one of the most common conditions in the United States, affecting more than 20 million people. Some symptoms of GERD overlap with symptoms of a heart issue, so it is important to know the difference. 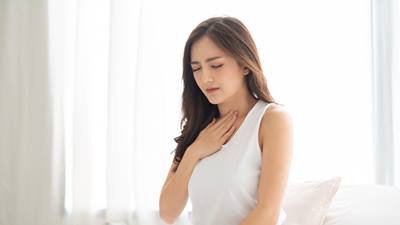 GERD occurs when food that has been eaten goes from the stomach back up through the esophagus, and even into the throat or mouth. In the esophagus, the muscle called the lower esophageal sphincter acts as a valve to keep food in the stomach as it is digested. If that valve weakens, food and stomach acids can enter the esophagus causing pain and inflammation. A hiatal hernia, which is when the stomach goes into the chest, can also cause GERD.

GERD can cause chest pain, but unlike heart attacks, where the pain starts in the chest but may radiate to the arm or jaw, pain from GERD usually stays in the chest. Additional symptoms of GERD include a feeling of regurgitation (food coming into the throat or back of the mouth), and less commonly, hoarseness of voice and cough. Some people have only one symptom and others may have a combination.

If you have chest pain and haven’t been diagnosed with GERD, or if your symptoms feel different from previous GERD pain, call 911.

People with sedentary lifestyles or who are obese increase their risk of GERD. Overeating can often trigger GERD.

Certain foods can trigger or worsen the symptoms of GERD, including:

How to Diagnose GERD

Most people will experience heartburn at some point, but it is the intensity and frequency that sets GERD apart from a rare discomfort. If you have symptoms two or more times a week, or if the symptoms are severe, you should talk with your primary care doctor.

Your symptoms and condition will determine the course of treatment. While testing is the failsafe way to diagnose GERD, not everyone needs to have a test. If you have heartburn less than once a week, your doctor may advise you treat it with an occasional antacid. If you have GERD symptoms more often than that, your doctor or gastroenterologist may want to do a more extensive exam.

While most people who have occasional heartburn are fine taking an over-the-counter medicine, too often, people who have chronic symptoms follow the same route and end up treating the symptoms but not the cause. Medicines like proton pump inhibitors (PPIs) will help the symptoms, and even though you may not notice the burning, the reflux will still be there. This is concerning because of the inflammation that is still occurring. Long-term, continued reflux can lead to Barrett’s esophagus, which is associated with developing esophageal cancer.

Robotic surgery is often used to repair both causes of GERD.

If you experience GERD two or more times a week, it is a chronic condition that’s not just uncomfortable, but can have long-term effects on your health. Talk with your doctor so you can get the proper treatment to be pain-free.

New Age Recommendation for Colonoscopies
Why Am I Waking Up Tired After 8 Hours of Sleep? Am I Suffering From Postpartum Depression?

Information will update every 5 minutes. ER Wait Times are approximate and provided for informational purposes only. Estimated Wait Times as of: Wednesday, October 28, 2020 10:31 AM