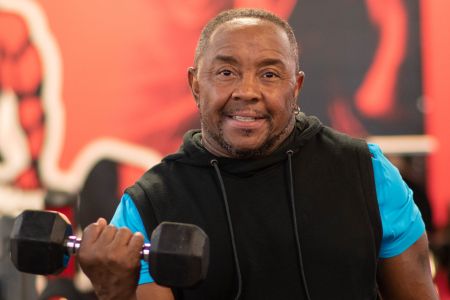 Now a Central Florida resident, Ellis called Cleveland, Ohio home as a child. Because he was raised in the Forest City’s white winters and 80-degree summers, he enjoyed a variety of sports growing up such as skiing, baseball, hockey and football to name a few. But overtime, Ellis’ extremely active lifestyle began to take a toll on his body even in his young age, as he was diagnosed with Osgood-Schlatter disease. Osgood-Schlatter causes knee pain in growing children who are very active and results in a painful lump below the kneecap. Though this condition can be resolved and usually doesn’t lead to additional issues, he would find himself experiencing similar problems well into adulthood.

Not much has changed since Ellis’ childhood as far as him leading an active lifestyle. He even changed his career path as the host of a popular radio show in Cleveland to pursue a career in the health and fitness industry. Though he still has a love for radio and occasionally works with a popular sports radio station in Cleveland, he was driven to make the change to help others reach their fitness goals. He was thrilled to have a job that allowed him to be active most days and drive others to do the same.

As Ellis continued the lifestyle he loved, the wear and tear of his constant activity began to take a toll on his body. He was in constant discomfort that began to worry his children and other family members, but most of all, himself. “It got to the point where I finally had to do something about it just from living in that level of discomfort and pain,” he said.

It got to the point where I finally had to do something about it just from living in that level of discomfort and pain. – Ellis, Knee Replacement Patient

Ellis began looking for a physician and came across Dr. Sean McFadden, an orthopedic surgeon specializing in knee care and joint replacement among other subspecialties with Orlando Health Jewett Orthopedic Institute. Because of his own passion for wellness, Ellis was appreciative of Dr. McFadden’s athleticism as a triathlete. He scheduled an appointment with Dr. McFadden and says they “hit it off immediately.”

As Ellis began care with Dr. McFadden, he was even more sure he’d chosen the right surgeon. When it was revealed that Ellis’ pain was being caused by a torn meniscus and that he needed knee surgery, Dr. McFadden gave Ellis the opportunity to choose the care he felt was best. “He was very honest and upfront. There was no grey area. He told me to take my time, do some research and do what was best for me. He gave me different options and let me make my own choice,” Ellis said of Dr. McFadden.

Based on his experience in the field, Dr. McFadden predicted that Ellis would most likely need a total knee replacement in the future. Nearly five years following his first surgery, Ellis began experiencing pain and underwent total knee replacement surgery performed by Dr. McFadden, a procedure that forever changed his life. “The process was so amazing because everyone was so thorough. From the information I was given to the orientation of the facility. They sat us down and showed us exactly how the procedure was going to be. We went through everything.”

Ellis was able to go on a 30-minute walk less than an hour after his knee surgery. At first, he was nervous and anticipating pain but was relieved to find that his knee felt much better. He was equally pleased to be released the same day and enjoy lunch at a restaurant with his family before starting to relax and recover at home. To finish the day, he went on another walk in his neighborhood.

The following day, Dr. McFadden arranged for Ellis to have a physical therapist and nurse at his home who gave him a plan to keep himself moving. Ellis was amazed that his knee bending ability increased by 30% within a week and that he was able to continue low impact workouts like yoga and bicycling only one month after his procedure.

Ellis is so thankful for his connection with Dr. McFadden. “I couldn’t believe I healed so rapidly,” Ellis said. “I got quality back.” He’s grateful he can continue his plant-based lifestyle, commitment to wellness and keeping a job that helps him stay active. Dr. McFadden has become like family and Ellis has been recommending his care to others with knee issues. Because of Dr. McFadden and the orthopedic team’s world-class care and Ellis’ commitment to a successful recovery, Ellis is getting back to the life he loves sooner than he ever imagined. 7 Myths and Misconceptions About Anesthesia

I’ve Torn My Rotator Cuff. Can Physical Therapy Fix It?

Information will update every 5 minutes. ER Wait Times are approximate and provided for informational purposes only. Estimated Wait Times as of: Thursday, October 6, 2022 8:19 PM