Orlando, FL (December 3, 2021) – This week Orlando Health Arnold Palmer Hospital for Children celebrated the first birthday of its Seacrest Studio, a broadcast media center that radio and television host and producer, Ryan Seacrest, and his family, developed to help patients explore the creative realms of radio, television and new media.

The space officially opened in December 2020 with a virtual ribbon cutting hosted by Ryan Seacrest. To protect the hospital’s patients and staff during the ongoing COVID-19 pandemic, most of the activities inside the studio have been virtual until now. Today country music star and Ryan Seacrest Foundation ambassador Jordan Davis, and country music band, Restless Road, stopped by for the studio’s first live performances. Davis was the studio’s inaugural celebrity performance when he gave a virtual concert for patients last year.

Another part of the celebration was a special red-carpet show where patients got to be the stars, participating in interviews, posing for photos and collecting awards and goodies. Patients also got to visit and snap photos with Santa Claus and a sand snowman, courtesy of the Coke Florida Holiday Caravan.

“We are so excited to be celebrating one year of Seacrest Studios at Orlando Health Arnold Palmer,” said broadcast coordinator Anthony Grier. “Despite the challenges of the pandemic, we’ve been able to create so many fun and educational moments for our patients. This is just the beginning for us and I’m really looking forward to utilizing the studio to its full potential as we start to welcome more special guests to our space.”

Seacrest Studios at Orlando Health Arnold Palmer is the first and only location inside a children’s hospital in Florida, and one of only 11 across the country. Complete with a green screen, cameras, microphones and a radio control board, the studio gives patients the opportunity to share the spotlight with guests and studio staff. Patients who are not able to leave their rooms are able to still participate in the fun through a closed-circuit television channel broadcasted throughout the hospital.

“It has been an absolute joy to see the impact Seacrest Studios has had on the patients, families and staff at Orlando Health Arnold Palmer over the last year,” said Meredith Seacrest, Executive Director & COO of the Ryan Seacrest Foundation. “Being able to celebrate with the hospital in-person this year was so special, and we’re excited to see all that 2022 has in store for patient experiences and studio programming.”

During the first year, the studio produced an average of 12 live shows per week and virtually hosted over 30 celebrities. A favorite program continues to be the interactive Bingo game show, where patients can compete from their rooms and call in to the studio to win prizes. Particularly during these challenging times, the studio has played a huge role in enhancing the patient and family experience at Orlando Health Arnold Palmer.

Orlando Health Arnold Palmer Hospital for Children is a 156-bed facility dedicated exclusively to the needs of children. Located in Orlando, Arnold Palmer Hospital provides expertise in pediatric specialties such as cardiac care, craniomaxillofacial surgery, gastroenterology, nephrology, neurology, oncology, orthopedics, pulmonology and sports medicine. The Bert Martin’s Champions for Children Emergency Department & Trauma Center at Arnold Palmer Hospital is part of the only Level One Trauma Center in the area, and is the first facility in Central Florida to provide emergency care exclusively for pediatric patients. Visit www.arnoldpalmerhospital.com to learn more about all of our specialties.

About the Ryan Seacrest Foundation 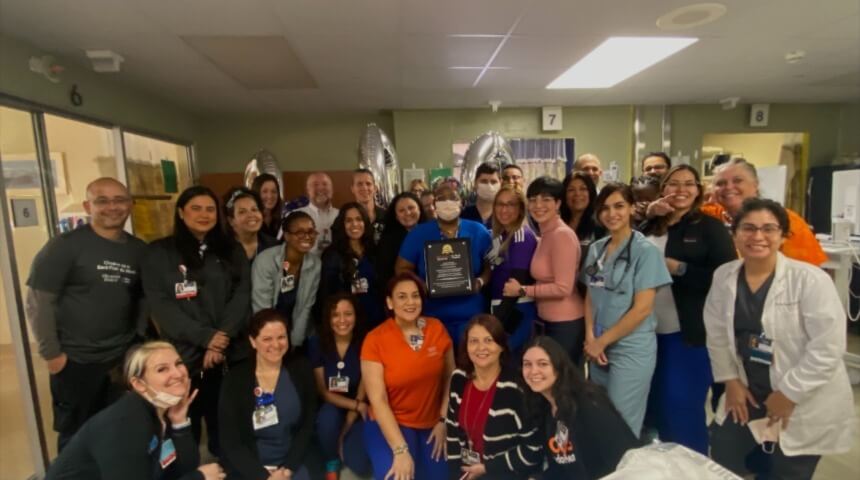 Information will update every 5 minutes. ER Wait Times are approximate and provided for informational purposes only. Estimated Wait Times as of: Thursday, February 9, 2023 1:32 AM