SunTrust is one of Orlando Health’s oldest and most valued relationships.

The gift was presented by SunTrust Chairman and CEO William H. Rogers, Jr. during a visit to Orlando Health. The donation supports Orlando Regional Medical Center’s new redesign and renovation project — the largest in Orlando Health’s history — which is currently under construction.

“At SunTrust, we believe that when you build your communities, you build your bank,” said Rogers. “We have been proud to serve as the primary bank for Orlando Health, and with this donation, we acknowledge its excellence in serving the healthcare needs of Central Florida residents and visitors. We are proud to be a trusted partner as Orlando Health introduces a new model of patient care.”

“SunTrust is one of Orlando Health’s oldest and most valued relationships. Since 1934, SunTrust has served as steadfast business partners and valued philanthropic investors. We would not be the same organization today without its long history of partnering,” said Jamal Hakim, MD, interim president and CEO, Orlando Health.

David Fuller, president and CEO, Central Florida Division, SunTrust Bank and Orlando Health Foundation board member added, “Ensuring that Central Florida’s residents have access to quality health care is critical for the success of our region. As Orlando Health begins the countdown to its centennial in 2018 and prepares for the next 100 years serving our community, we are proud to invest in this important expansion.”

Last month, Orlando Health announced it will remain independent and launch a national search for a CEO. 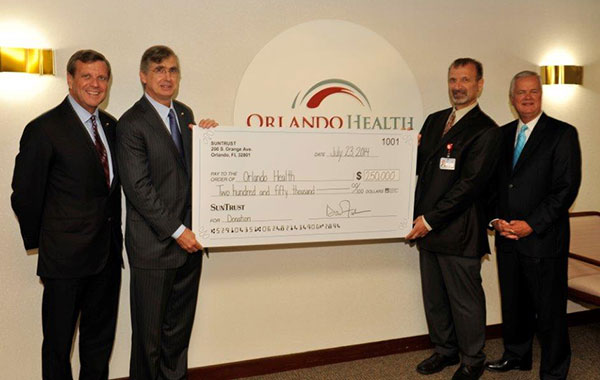 
About SunTrust Banks, Inc.
SunTrust Banks, Inc., headquartered in Atlanta, is one of the nation's largest banking organizations, serving a broad range of consumer, commercial, corporate and institutional clients. As of June 30, 2014, SunTrust had total assets of $182.6 billion and total deposits of $133.3 billion. Through its flagship subsidiary, SunTrust Bank, the company operates an extensive branch and ATM network throughout the high-growth Southeast and Mid-Atlantic states and a full array of technology-based, 24-hour delivery channels. The company also serves clients in selected markets nationally. Its primary businesses include deposit, credit, trust and investment services. Through various subsidiaries the company provides mortgage banking, insurance, brokerage, investment management, equipment leasing and investment banking services. SunTrust's Internet address is suntrust.com.

Information will update every 5 minutes. ER Wait Times are approximate and provided for informational purposes only. Estimated Wait Times as of: Sunday, March 7, 2021 7:56 PM