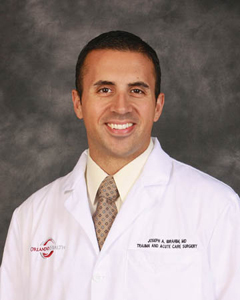 Unintentional injuries are one of the top five causes of death across Central Florida, according to the 2016 Community Health Needs Assessment (CHNA).

The CHNA, a comprehensive report that is the result of a collaboration between several of the area’s top healthcare providers — including Orlando Health, also found that unintentional injury deaths are the only cause of death that has continued to increase across the four-county region. Other leading causes of death across Lake, Orange, Osceola and Seminole counties included cancer and heart disease.

According to the Centers for Disease Control and Prevention (CDC), accidents and unintentional injuries cause nearly 136,000 deaths a year and are the fourth leading cause of death in the country. The statistics in Central Florida reflect a similar pattern. Here’s a county-by-county breakdown for traumatic deaths in the area.

The number of unintentional injury deaths remained constant between 2008 to 2012 in the county, but increased in 2014.

In Orange County, unintentional injury deaths increased between 2012 and 2014. It was the third leading cause of death in the county behind cancer and heart disease, accounting for nearly 38 deaths per 100,000 people in 2014. This is slightly below the Healthy People 2020 goal of 36.4 deaths per 100,000.

Overall, the number of accidents has increased in Central Florida’s four-county region, largely driven by an increase in the number of deaths from drownings, falls, poisoning and vehicle accidents in the area. Falls are not only one of the leading causes of unintentional deaths in Florida, but have become an epidemic across the country. In addition, experts say people between the ages of 19 and 21 are more likely to die in vehicle accidents than any other group. Central Florida rotates as being number one and number two in the country for auto versus pedestrian accidents.

Unintentional deaths are just that — unexpected. But there are things you can do to be more safe. Our community has recognized our high number of auto versus pedestrian accidents and as a result, our trauma center has worked in collaboration with the organization Best Foot Forward. Along with Best Foot Forward, we try to raise awareness about the use of crosswalks, walking signs and make drivers more aware as well. In addition, the CDC’s website has helpful information on ways to prevent drowning, as well as tips to prevent poisoning. The National Institutes of Health’s Osteoporosis and Related Bone Diseases Resource Center also has information about how to prevent falls and fractures, which become more of a risk as you age.

If you’d like to learn more about community health needs in Central Florida, you can access the Community Health Needs Assessment on this page.

Are you interested in learning more about our Emergency and Trauma Care?

Emergencies can happen anytime, anywhere. Which is why all Orlando Health hospitals are equipped and staffed to handle any emergency situation — big or small. Our team of physicians are all board certified in emergency medicine, and are here for you, 24 hours a day, seven days a week. We are also proud to offer Central Florida’s only Level One Trauma Center, located at Orlando Health Orlando Regional Medical Center.

Information will update every 5 minutes. ER Wait Times are approximate and provided for informational purposes only. Estimated Wait Times as of: Sunday, December 5, 2021 12:03 PM