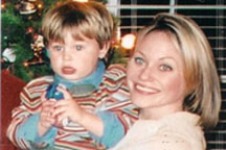 Amanda Cole drove on the Florida Turnpike towards Clermont on the morning of January 12, 2005. Her work demanded she spend a lot of time in the car, but she did not mind; she had to provide for her son, Jackson. At twenty-five, she could think of no higher responsibility and honor than being a mother to her two-year-old son.

She had just completed a meeting and called to confirm her next appointment. No one knows exactly what happened before her car collided with a tree. The twisted metal resembled a bobby pin. Only Amanda’s head and one hand were visible.

Time ticked by. Paramedics, firefighters, police, the Orlando Regional Air Care Team – about fifty emergency personnel attempted to rescue Amanda from the wreckage, but they could not release her. Time continued to slip away as they tried with no avail to set her free. Not wanting to lose her – they decided they were going to amputate her legs at the scene. “Give me one more try,” pleaded the already exhausted tow-truck driver, David. He knew this young woman’s life could be saved if he could just lift the car enough for them to reach her. One more try is all it took. They cut the metal away from Amanda and pulled her from the crumpled car.

Two and half hours after the crash, the Air Care Team lifted from the scene with Amanda and flew her to Orlando Regional Level One Trauma Center. The young woman’s body did not look any better than her car. Her face cut and broken. Her skull split open. Her lungs punctured. Glass everywhere. Her arm broken. Her legs crushed. Shock had set in. She was losing blood. Her life was slipping away. The Air Care Team worked steadily on the ten-minute flight to keep her alive. The trauma team, led by critical care surgeon John Promes, MD, stood scrubbed and ready.

“We will try and save her legs,” orthopedic surgeon Donald Pearson, MD, told Glenn and Peggy Cole, Amanda’s parents, before he went into the emergency surgery. Hours later, Dr. Pearson returned. “I’m very sorry but we had to amputate her legs above the knee,” he broke the news to the devastated parents. Amanda had given up ballet several years ago to pursue her degree at the University of Florida, but Peggy could not stop the images from coming to mind of her daughter dancing. She wept.

The beautiful young woman who paid her way through college acting and modeling, battled for her life. No one knew if she would survive. “There is no pain like seeing your child just lying there and not know if she will live,” explains Peggy over the lump that rose again in her throat. For five days, Amanda lay in the Intensive Care Unit in ORMC recovering from the crash and the initial surgery on her legs and face. “The ICU nurses were concerned first for Amanda. When they let us go in to see her they warned us, ‘If you or she gets upset, we won’t be able to let you go back in.’ They were there for their patients; it was comforting,” says Peggy in appreciation of the care Amanda received and the comfort and confidence the nurses gave them.

But by day five, everyone could see the spitfire determination of Amanda returning as she wrote on a sign, Want Out! Peggy knew they still had a long road ahead, but her daughter was alive and her spirit undamaged. Several more surgeries followed to repair Amanda’s broken arm, her broken elbow, and her mangled jaw.

“I kiss mama’s boo-boos,” Jackson said as he placed a kiss on every scratch on her face, neck, and arms. “He’s good medicine,” says Amanda. “I am not sad about losing my legs,” she explains honestly, “A leg is just a leg. I can replace them. The important thing is that I’m alive for my son.” Amanda’s love for her son has kept her perspective very hopeful. “No matter the circumstance, I’m a mom and I have to get well so I can raise my son.”

“When I look at Dr. Pearson I have that feeling I get with my dad that he would do whatever it took to take care of me,” shares Amanda. Physical medicine specialist Nicholas Bagnoli, DO, and the Orlando Regional Lucerne Hospital Rehabilitation team worked with her to strengthen her body and teach her how to do things like move herself to and from her wheelchair. “Dr. Bagnoli’s attention to detail is amazing—he worked so hard to give me the best care he could.” Neurologist Jane Boggs’, MD, determination to find answers to Amanda’s seizure has left Amanda in awe as well, “She is so informed and knowledgeable, while still being warm and genuine. I didn’t know the definition of bedside manner until I met these doctors.” Amanda continues her praise in saying, “They saved my life. How can I describe how much respect I have for them? Thank you just doesn’t say enough. I am proud to have these doctors because they are all so good. I want to make them proud.”

On Amanda’s twenty-six birthday, she moved to Orlando Regional Lucerne Hospital for rehabilitation. Her friends decorated her room and brought her a cake all with the theme she chose—mermaids. “Mermaids don’t need legs to be beautiful creatures.”

Amanda returned home one month after the horrific crash. She continues her rehabilitation with the determination to not only walk, but to dance.

Information will update every 5 minutes. ER Wait Times are approximate and provided for informational purposes only. Estimated Wait Times as of: Friday, October 30, 2020 9:25 AM