Understanding the Risks for Concussions in Soccer

As we look forward to this summer’s 2018 FIFA World Cup, we should understand that being a champion can have its costs. We often hear about concussions in football, but soccer also comes with its own risk of serious head injuries.

Nearly 3.8 million concussions occur each year in the United States, according to Sanford Health.

Despite the increased attention given to concussions, many people are still confused about what they actually are and when to seek treatment. About 50 percent of concussions still go unreported, so it’s crucial that parents, players and coaches understand what this condition is and how serious it can be.

Nearly 3.8 million concussions occur each year in the United States, according to Sanford Health. 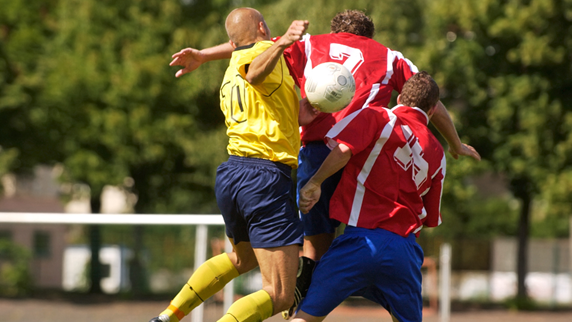 As a contact sport, soccer poses a significant risk for concussions and head injuries. The head is at risk of contact with the ground during a fall or with another player’s head, elbow, knee or foot. The greatest chance for impact in soccer comes during contested headers and set plays, such as corner kicks, where many players are in close contact.  Concussions can also occur without direct impact to the head. A hard hit to body could cause the head and neck to move quickly with a whiplash effect.

The brain is a semi-solid material, like JELL-O or tofu. It is surrounded by a layer of fluid to cushion it inside the hard skull, which is there to protect it. Take the example of a player who attempts to head a ball, but instead comes in contact with the knee of his opponent. In this case, the other player’s knee hits our player’s skull, which then hits the brain.  In the whiplash example, the brain and skull are moving forward as a unit. If a hard blow happens to the body, the skull stops moving because it is attached to the body, but the brain keeps moving forward until it hits the skull. This is how a concussion can occur without a direct blow to the head.

If the force of the impact is enough to injure the brain cells, a pathologic process begins that affects the lining of the brain cells.  The lining becomes leaky, allowing molecules to drift back and forth inappropriately. Because of this, the nerve cells cannot function properly or efficiently.

When this happens, a player will begin to experience symptoms like headaches, fatigue, nausea, mood changes, lack of coordination, slurred speech and sensitivity to light and sound. Contrary to popular belief, you don’t have to pass out to have a concussion (in fact, this happens in very few cases). Concussion symptoms will vary from person to person, so all symptoms and unusual behaviors following a blow to the head should be taken seriously.

Minimizing the Risk of Concussions

Concussions are a real danger whenever a soccer player hits the field. So, what should you do if you’re a competitive athlete—or better yet a concerned parent or spouse? Many sports leagues, including Major League Soccer and U.S. Soccer, have implemented concussion evaluation and management protocols, which are evaluated and updated on an annual basis to reflect the newest research-based knowledge. If you are unsure of whether your local league has put similar measures into place, talk to the coach or sports director about how they handle player concussions, and consider aligning with a medical provider with experience in managing sports-related concussions.  We also can minimize the risk of concussions in soccer players by teaching safe play habits. When a player knows the rules of the sport, this helps to stop preventable collisions.

Even with the proper precautions, concussions still happen. Sports are unpredictable and athletes cannot anticipate or always protect themselves from impact that could lead to a concussion. If you’ve experienced a head impact and don’t feel right, tell your coach.

Teammates also should keep an eye on one another and educate themselves about concussion symptoms. It’s especially important to do this in youth soccer because young brains are more sensitive to the effects of a concussion, and younger athletes also have longer cognitive recovery times.

If you have any signs or symptoms of a concussion, you should never return to sports or recreational activities on the same day. Take time to heal, and only return to your normal routine after a doctor trained in treated concussions has evaluated you. Following these steps will protect your brain and reduce your risk of more serious, long-term health issues.

Get a Free Guide to Prevent Sports Injuries

While exercise and sports-related activities often have a positive impact on our lives, they can also lead to serious injury. At the Orlando Health Orthopedic Institute, our multidisciplinary sports medicine team is committed to providing exceptional orthopedic care to help you return to your active, pain-free lifestyle.

Information will update every 5 minutes. ER Wait Times are approximate and provided for informational purposes only. Estimated Wait Times as of: Wednesday, October 27, 2021 2:18 PM