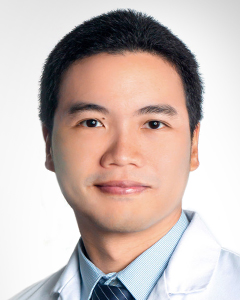 As a board-certified pulmonologist, Dr. Tunsupon is trained to care for patients with a range of complex conditions. His focus is on the prevention, diagnosis and treatment of conditions affecting the respiratory system, which comprises the lungs and other organs that enable breathing. Some of the conditions he treats are:

He works with a group of specialists to provide the best level of care possible to critical care patients who usually are admitted through the emergency department and then transferred to the intensive care unit (ICU). These patients require highly trained physicians such as Dr. Tunsupon and the entire critical care team for a chance of recovery.

Chronic obstructive pulmonary disease (COPD) is a broad term describing diseases characterized by airway inflammation, limited airflow, and damage to lung tissue. It is usually caused by smoking or exposure to cigarette smoke or to other irritants in the air. COPD worsens over time and cannot be cured, however treatment may help minimize damage to the lungs and help control symptoms.

Emphysema and chronic bronchitis are two common forms of COPD, which usually appear together. Patients with emphysema have damage to the air sacs in their lungs and are unable to breathe in enough air to maintain the level of oxygen the body needs. Those who have had a cough with excessive mucus almost daily for at least three months may be diagnosed with chronic bronchitis. While these conditions vary in severity, they both make breathing difficult and the ability to perform everyday activities like climbing the stairs or walking challenging.

Another grouping of progressive, chronic lung disorders is interstitial lung disease (ILD), also known as pulmonary fibrosis. Symptoms may differ from patient to patient depending on different types of ILD, however shortness of breath and a dry cough are common to all. Beginning as chronic inflammation and chronic healing process in the lung tissue, ILD forms within the air sacs and other lung structures, causing the lungs to “stiffen,�? which makes breathing difficult and diminishes the quality of life.

Rheumatoid lung disease – an inflammatory disease affecting the joints and surrounding tissue that may also damage the lungs by causing inflammation on the lining of the lungs, accumulation of fluid around the lungs, nodules in the lungs and scarring.

Sarcoidosis – an inflammatory disease that can cause tiny lumps of immune cells to grow in the lungs, lymph nodes and other organs. The disease may be mild or progress to the point of causing permanent organ damage.

A few initial signs of interstitial lung disease are:

Testing for an Accurate Diagnosis

While symptoms are often a good preliminary indicator of a pulmonary disorder, expert testing is key to an accurate diagnosis. This is followed by the development of a personalized care plan and arrangements for the best advanced procedures and treatment available. Some of the tests and procedures Dr. Tunsupon uses include:

There are many kinds of pulmonary disease and exposure to a number of causes and risk factors may make it more likely to develop one. Smoking is the biggest risk factor for many pulmonary diseases and disorders. To determine the overall impact of smoking, the number of cigarettes smoked each day and the number of years a patient has smoked must be considered. Cigarette smoke also harms nonsmokers who are exposed to secondhand smoke on a frequent basis.

Repeated exposure to asbestos and other industrial toxins in workplaces such as factories and farms, especially when combined with smoking, may increase the risk of developing a respiratory condition. This includes active-duty soldiers and veterans of the Vietnam War and Gulf/Afghanistan War who were exposed to numerous airborne elements shown to cause a range of pulmonary illnesses.

Dr. Dr. Tunsupon earned his medical degree from Mahidol University in Bangkok, Thailand, followed by an internship and internal medicine residency at Cleveland Clinic Foundation in Ohio. He completed his pulmonary and critical care fellowship at State University of New York at Buffalo in New York.

He is American board certified in internal medicine, pulmonary diseases and critical care medicine. He has served as an assistant professor at University of Florida in Gainesville for several years. He has articles published in multiple peer-reviewed medical literature.

Dr. Tunsupon is fluent in both English and Thai.

Pneumonia: What You Should Know

Information will update every 5 minutes. ER Wait Times are approximate and provided for informational purposes only. Estimated Wait Times as of: Monday, July 4, 2022 1:46 AM