(ORLANDO, Florida) –  Esports is breaking into the mainstream sports scene, selling out stadiums and attracting millions of fans. In fact, the NBA 2K League is now in its second season and features the video game, NBA 2K.

As more esports athletes go pro, doctors are learning about their unique needs and challenges. Orlando Health has partnered with Magic Gaming as the official medical team for Orlando’s NBA 2K League team, and doctors there are working to develop a new protocol to help keep these athletes at the top of their game.

“These young men and women are true athletes. It takes incredible skill to play at their level and a lot of endurance to maintain their grueling training schedule,” said Todd Sontag, DO, a physician at Orlando Health who is leading Magic Gaming’s care team. “With any emerging sport, medicine has to evolve along with it. We are developing tailored care for esports athletes, from injury prevention to mental health counseling.”

Sontag says esports athletes can be prone to musculoskeletal injuries like tendonitis and back issues, and personal trainers work with players on things like finger stretches and core strength. “Without a strong core, players can be setting themselves up for injuries,” said Sontag. “In a team sport like this, it’s important for every player to stay healthy.”

Mental health can be just as important to a player’s performance as physical health. Professional esports athletes are under a lot of pressure to perform consistently at an elite level, a demand that many young players have never experienced. “These young athletes are doing their dream jobs, and there are a thousand people ready to take their place if they don’t play well,” said Sontag. “Counseling is an integral part of their medical plan to provide support after long training days that can consist of up to ten hours of practicing and strategizing.”

Sontag will monitor players throughout the season to stave off injuries and help them compete at their best against the other 20 NBA 2K League teams. He’s hoping more healthcare providers will implement the standard of care being developed in Orlando to treat professional esports athletes nationwide.

Brendan "Reid" Hill undergoes a physical exam as a team member of Magic Gaming of the NBA 2K League. Orlando Health has partnered with the professional esports team to develop a standard of care specifically for esports athletes.

Dr. Todd Sontag plays a Wii video game in his office. He is leading a team of doctors to provide healthcare for Magic Gaming tailored to the needs of professional esports athletes. 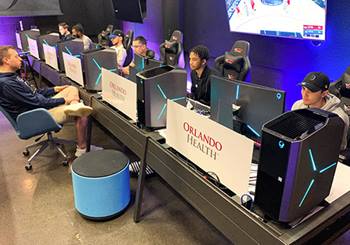 The Magic Gaming team plays a scrimmage against the Atlanta Hawks GC. The NBA 2K League is in its second season, and as more esports athletes go pro, doctors are working to develop medical treatment specific to their unique needs. 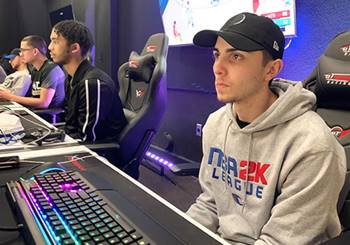 Brendan "Reid" Hill plays in a scrimmage with Magic Gaming, a professional esports team in the NBA 2K League based in Orlando, Fla. As more athletes like Reid go pro, doctors at Orlando Health are learning more about their unique medical needs and are developing protocols to keep them in top physical and mental shape. 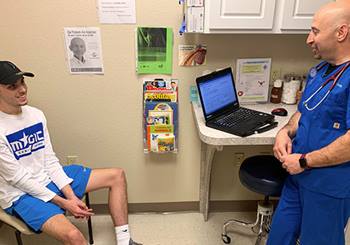 'Get Up’ Became Egamer’s Mantra After First Blood Clot Yes, They’re Fun, But Can Video Games Also Be Therapeutic?

Could You Have a Video Gaming Injury?

Information will update every 5 minutes. ER Wait Times are approximate and provided for informational purposes only. Estimated Wait Times as of: Friday, December 2, 2022 6:51 AM