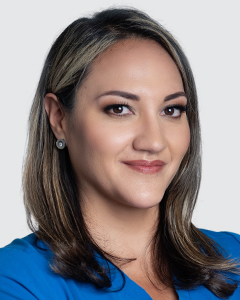 Cynthia P. Bernal, MD, FACOG, is a gynecologist and obstetrician with Orlando Health Physician Associates, where her focus is minimally invasive procedures and robotic surgery. Her areas of interest include the diagnosis, treatment and prevention of diseases and disorders that affect women such as endometriosis, adnexal masses, uterine fibroids, postmenopausal symptoms and high-risk obstetrics.

Dr. Bernal earned her medical degree from Ross University of Medicine in Portsmouth, Dominica. She completed her bachelor of science degree in human biology at the University of Albany in New York, where she was recognized as a Ronald McNair Program Scholar by Albany Medical College.

Dr. Bernal completed her residency in obstetrics and gynecology at Rochester General Hospital in New York. During this time she earned her certification in da Vinci® robotic-assisted surgery and was recognized with the Chief Resident Award in minimally invasive gynecology. She also served as a clinical associate professor of obstetrics and gynecology at Stony Brook Hospital School of Medicine in New York, and participated in international medical missions to Ecuador and South Africa.

Dr. Bernal is a fellow of the American Congress of Obstetricians and Gynecologists (FACOG) and is fluent in both English and Spanish. The Many Reasons Why You Need an OB-GYN Information will update every 5 minutes. ER Wait Times are approximate and provided for informational purposes only. Estimated Wait Times as of: Friday, December 2, 2022 7:24 AM