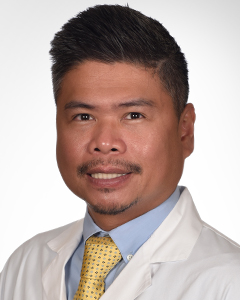 Gino Castaneda, MD, FACS, is a board-certified vascular surgeon with the Orlando Health Heart & Vascular Institute. He treats patients with arterial and venous conditions throughout the body.

Significant arterial blockages require the care of a vascular surgery specialist such as Dr. Castaneda. To restore blood flow to affected areas, he and his team move quickly to identify the location of the blockage and perform the most appropriate procedure. While many blockages can be treated with minimally invasive surgery, others require more complex procedures such as bypass surgery. He also may perform diagnostic testing, including:

Dr. Castaneda earned his medical degree from St. Luke’s College of Medicine – William H. Quasha Memorial in the Philippines followed by a general surgery residency at Texas Tech University in El Paso, Texas. Here he served as chief resident and was recognized as resident of the year multiple times due to his dedication and work ethic. He then completed a fellowship in vascular surgery at Sanger Heart and Vascular Institute, Carolinas Medical Center in Charlotte, North Carolina. During his surgical training, he was accepted into two very prestigious honors society: The Alpha Omega Alpha Honor Medical Society and the Gold Humanism Honor Society.

Dr. Castaneda is certified by the American Board of Surgery and a fellow of the American College of Surgeons. He also is a registered physician in vascular imaging, a certification indicating the highest standard of vascular interpretation documentation.

In addition to contributing to several clinical research studies and publishing his work, he has participated in more than 10 medical missions to underserved areas throughout the Philippines. Dr. Castaneda is fluent in both English and Filipino and conversant in medical Spanish.

Information will update every 5 minutes. ER Wait Times are approximate and provided for informational purposes only. Estimated Wait Times as of: Thursday, October 6, 2022 4:52 AM