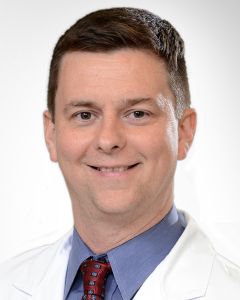 Justin Rineer, MD, is a radiation oncologist at Orlando Health Cancer Institute where he specializes in melanoma/sarcoma and thoracic malignancies. He is board certified in radiation oncology.

His primary research interests include improving outcomes through the application of multi-modality treatment in lung and esophageal cancer. He has presented his original research at top national and international meetings, including the annual meetings of the ASCO and American Society of Radiation Oncology (ASRO).

Dr. Rineer has published many peer-reviewed articles in several high-impact medical journals. He’s an active member of both the ASCO and the ASRO. Additionally, Dr. Rineer is fluent in French.

Information will update every 5 minutes. ER Wait Times are approximate and provided for informational purposes only. Estimated Wait Times as of: Thursday, February 9, 2023 12:32 AM