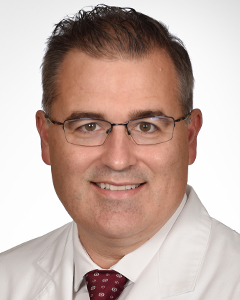 Dr. Claudeanos is a board-certified vascular surgeon with Orlando Health Medical Group FHV Health. He specializes in treating patients with diseases of the arteries, veins and lymphatic system. His clinical interests include arterial aneurysm repair, peripheral arterial disease and critical limb-threatening ischemia, hemodialysis access and disorders of the venous system.

Dr. Claudeanos earned his bachelor’s degree in physiological sciences from the University of California Los Angeles (UCLA). He received his medical training at Saint George’s University School of Medicine in Grenada, West Indies. His residency in general surgery was completed at Albany Medical College in New York, where he served as chief resident. He also performed a vascular surgery fellowship at the University of South Carolina – Greenville Health System in Greenville.

Double board certified in surgery and vascular surgery, Dr. Claudeanos also is a Fellow of the American College of Surgeons.

He is active in several professional societies, including the Florida Vascular Society, the Vascular and Endovascular Surgical Society and the Society for Vascular Surgery.

When not working, Dr. Claudeanos enjoys spending time with his wife and four children. An avid sports fan, he follows the Golden State Warriors, San Francisco Giants, Fútbol Club Barcelona and Orlando City SC. He also is an accomplished snowboarder.

Information will update every 5 minutes. ER Wait Times are approximate and provided for informational purposes only. Estimated Wait Times as of: Friday, July 1, 2022 6:08 AM