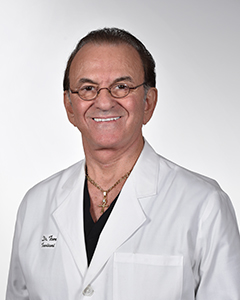 Tom Trevisani, MD, is a cosmetic surgeon on staff at Orlando Health. He is board certified in plastic surgery and his clinical interests include rhinoplasty, facelift/neck lifts, all facial surgeries, breast augmentation, body contouring, abdominoplasty and post-bariatric reconstruction.

Dr. Trevisani earned his medical degree from the University of Nebraska School of Medicine. After completing an internship at the Kaiser Foundation Hospital in Oakland, California, Dr.  Trevisani received general surgery training at the University of Miami School of Medicine– Jackson Memorial Hospital. He then completed his plastic surgery training at the Medical College of Wisconsin in Milwaukee.

Dr. Trevisani has been in private practice in Central Florida since 1983 and has performed more than 12,000 surgeries. In 2015 and 2016, he was voted by Orlando Sentinel readers as “Best Cosmetic Surgeon,�? as well as featured in the TV show “The Doctors.�? In response to his lectures and publications, Dr. Trevisani has received the Physician’s Recognition Award for Continuing Medical Education from the American Medical Association.

He is a member of the Orange County Medical Society, the Florida Medical Association, and the American Board of Plastic and Reconstructive Surgery.

Information will update every 5 minutes. ER Wait Times are approximate and provided for informational purposes only. Estimated Wait Times as of: Sunday, November 29, 2020 8:30 AM