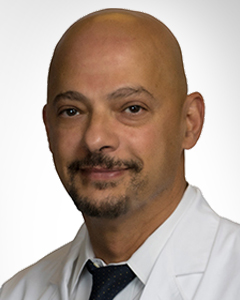 Yasser A. Khaled, MD, is the medical director of the Orlando Health Cancer Institute Bone Marrow Transplant and Cellular Therapy program. He is board certified in hematology and specializes in cellular therapy and blood and bone marrow transplantation.

One of Dr. Khaled’s specialties is cellular immune therapy, in particular Chimeric Antigen Therapy, also known as CAR-T cell therapy. The procedure improves the immune system’s ability to fight cancer and is accomplished by collecting a patient’s immune cells from their blood, genetically modifying them in the lab, and then returning them to the patient. This promising treatment enables Dr. Khaled to more effectively target conditions such as lymphoma and acute leukemia.

Patients with blood and immune system diseases like leukemia, myeloma and lymphoma may benefit from blood and bone marrow stem cell transplantation, which is another area of expertise for Dr. Khaled. Diseased bone marrow is replaced with healthy cells from the patient or a donor during this procedure.

Patients receive chemotherapy or radiation to destroy diseased cells and marrow prior to transplantation. They then receive healthy cells via an IV. These cells travel to the marrow and begin to produce healthy red and white blood cells and platelets as they grow.

Dr. Khaled earned his medical degree from the Cairo University School of Medicine in Egypt. He completed a residency in internal medicine at Woodhull Medical Center in Brooklyn; fellowship in medical oncology at Virginia Commonwealth University in Richmond; fellowship in hematology at New York Medical College; and a blood and bone morrow transplantation fellowship at the University of Texas M.D. Anderson Cancer Center in Houston.

Prior to coming to Orlando Health, Dr. Khaled served as the medical director of the Blood and Marrow Transplant Center at Methodist Le Bonheur Health Care in Memphis. In less than four years, he led the program to a top 10 percent ranking in survival outcomes according to the National Marrow Donor Program, which is an independent agency that reviews the outcomes of bone marrow transplant centers in the United States. He also brought the first cellular immune therapy (CAR-T cell) for the treatment of lymphoma and acute leukemia to Memphis and the Mid-South, an achievement that earned him an award as a Memphis Health Care Hero (Physician Category) in 2019.

How Bone Marrow Transplants Save Lives

Information will update every 5 minutes. ER Wait Times are approximate and provided for informational purposes only. Estimated Wait Times as of: Saturday, November 26, 2022 7:10 PM