Despite the Long Odds, My Boys Survived Their 20 Percent Chance

My husband and I had been trying to have a baby for quite some time, so in 2008 when we found out we were pregnant, we were overjoyed! When we learned I was carrying twins, we were doubly ecstatic! I knew instantly that I would want to deliver at Orlando Health Winnie Palmer Hospital for Women & Babies.

In the beginning, things started off normally, but I was only two months into my pregnancy when I was rushed to triage at Orlando Health Winnie Palmer due to complications. Because I was 37 years old, a prenatal amniocentesis test was done to check on the babies. Specifically, the doctors wanted to see if Twin B may have down syndrome. He did not.

The next couple of months went by with no issues. Then, during my 21-week ultrasound, we discovered Twin B had multicystic kidney disease. At that moment, Twin B was named Quincy, inspired by the movie, “John Q” with Denzel Washington — a true story about a little boy with kidney disease.

Just 10 days later, I began labor. I was only 22 weeks and three days along, and to make it even more difficult, it was just seven days before Christmas. Because the twins were so premature, the doctors explained there was a minimal chance of survival. After some urging, the doctors reluctantly agreed to let me go home to be on strict bed rest, in hopes that I could carry the babies as long as possible. However, if I was to have any severe labor symptoms, I was instructed to come back to the hospital immediately. 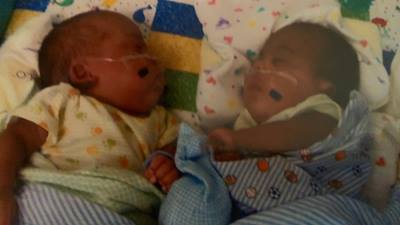 The doctors met with us and told us the twins had a 20 percent chance of survival.

My husband and I looked at each other, and then decided: 20 percent was better than none. During labor, the doctors discovered I had a blood infection and that my babies and I were all at risk of dying.

I was rushed to the operating room and there he was, Gregor Alexander, MD, our Christmas angel. As each baby was born, he brought them to me so I could give them a kiss. Then he and his team hurried off to help my boys live.

NICU as the First Home

Born at just 23-weeks gestation, the boys spent their first several months in the neonatal intensive care unit (NICU). It was truly their first home. For six months, they recovered under the incredible care of the Orlando Health Winnie Palmer team. It was an emotional roller coaster with many ups as the babies developed, but also many downs as they faced challenges and setbacks.

My husband and I spent many days and nights at the hospital with our boys. The team became like family, holding us up during the difficult and uncertain times. 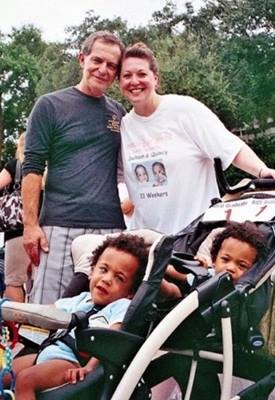 Even though we knew our sons were getting great care at Orlando Health Winnie Palmer, leaving the hospital time and time again without my babies was the absolute worst feeling a mother could imagine. Every time the phone rang we cringed, praying it wasn’t the hospital calling to deliver devastating news.

Then one day, we got a phone call. But it was a wonderful one. The boys could come home! They were just five and a half months old, weighing 8 pounds each, but they were strong enough to leave the hospital.

After being discharged from Orlando Health Winnie Palmer, we continued to see a number of specialists. Quincy was diagnosed with Cerebral Palsy. He has chronic lung disease, multi-cystic kidney disease and pulmonary hyper tension. On the other hand, Jackson has fared pretty well. He was born with a large scar on his lower back that womb care monitored and took care of while in the NICU. These boys are little fighters!

I’m so pleased to share that today our NICU graduates are 10 years old! We are forever grateful to the team who gave us the best Christmas gifts we ever could have asked for.

Are You Interested in Learning More About Women's Health?

Sign up for our e-newsletter to have the latest health and wellness news from Orlando Health Winnie Palmer Hospital for Women & Babies delivered to your inbox.

Sign Up Here
After Pregnancy: The Forgotten Fourth Trimester
Can I Avoid Getting Stretch Marks?

Is Getting Your Tubes Tied the Right Choice?

Pregnancy and Childbirth|Prevention and Wellness

Why Some High-Risk Pregnancies Should Rely on Low-Dose Aspirin

Information will update every 5 minutes. ER Wait Times are approximate and provided for informational purposes only. Estimated Wait Times as of: Wednesday, February 24, 2021 12:55 PM