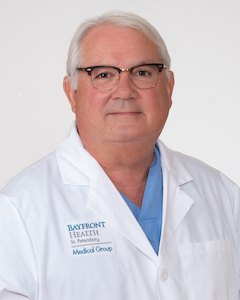 Jeffery L. Johnson, MD, began his career in the United States Air Force. He earned his medical degree from the Uniformed Services University of the Health Sciences in Bethesda, Maryland. He completed his residency in surgery at Keesler Medical Center in Biloxi, Mississippi, followed by a fellowship in surgical critical care and a fellowship in trauma, both completed at Orlando Health Orlando Regional Medical Center. He spent 10 years at the University of Maryland’s Shock Trauma Center as one of the founding members of the collaborative efforts between Military and Civilian trauma centers known as the Center for Sustainment of Trauma and Readiness Skills (CSTARS) which trained military medics in civilian centers to ready them for deployment to a war zone.

Dr. Johnson is the recipient of two Bronze Stars for Valor – in Blad, Iraq and in Bagram, Afghanistan – as a member of the U.S. Air Force. An accomplished lecturer, he has presented on many aspects of trauma care and surgery and has been awarded several grants to advance new products and medical techniques.

Information will update every 5 minutes. ER Wait Times are approximate and provided for informational purposes only. Estimated Wait Times as of: Wednesday, January 19, 2022 11:16 PM