I CHOOSE TO LIVE LIFE WITH A PURPOSE.

I CHOOSE TO LIVE LIFE WITH A PURPOSE.

Giving to Others as Was Given to Me

My story has a unique perspective, because I have had the opportunity to experience Orlando Health as a guest, as a patient, as a volunteer and now as a team member.

As a patient, my story at Orlando Health Cancer Institute began in March 2016. I had gone for my annual mammogram at Orlando Health, like I always did. I was fanatical about getting regular mammograms, because both my mother and grandmother had breast cancer. But this time, I got a call back later that morning.

When the nurse called and told me I needed to come back in the next morning, I could hear something in her voice – something that told me it was urgent. I went in the next morning, and from there it became ultrasounds and biopsies, and then the diagnosis. When I heard “you have breast cancer,” I felt numb; I couldn’t begin to process the news.

My first appointment at the cancer center was with my oncologist, Dr. Nikita Shah. When my husband, Mike, and I first met Dr. Shah, I was still feeling numb, yet terrified. She sat down with us and held our hands and looked us right in the eye and her first words were, “We’re going to get through this together.”

Dr. Shah mapped everything out for us, and told us exactly what we could expect. She was very knowledgeable, but she was also confident, caring and compassionate. After that first appointment, every appointment with her started with a big hug. And throughout my treatment, if I needed her, I was able to reach her by phone, just as she had promised in the beginning.

I was scheduled to begin chemotherapy within a month, and during that time I had a lot of different appointments in preparation. I came in contact with many different people — doctors, nurses, technicians, front desk receptionists — and with everybody I met, there was an instant connection.

When I started chemotherapy, I felt so much positive energy. Every time I went in, everyone was so supportive and gave my strength, starting with when I dropped my car off with the valet attendants – right there – even they did things in what I call the “Orlando Health Way” with their encouragement and always asking how I was doing, how I was feeling.

For me, the Orlando Health Way is a feeling of family, with a level of teamwork that I’ve never seen anywhere else – working together to support and nurture and lift up, providing that strength that I felt.

I had six months of chemotherapy, first every three weeks and then once a week. So, every Thursday afternoon, I would be there for three or four hours. Sometimes I would sleep, sometimes not, and if I wasn’t sleeping I was thinking. And that’s when it hit me that this was the environment where I wanted to spend my time — in this setting, in this hospital.

When I began radiation treatment, I saw the same people every day for 30 consecutive treatments, and again there was a personal connection. And because I was so well taken care of, it just deepened my passion that this was where I wanted to be — to be able to do the same for other patients as was being done for me.

After I had finished radiation, my Orlando Health story would continue, this time as an inpatient, when a spot was discovered on my pancreas. The tumor was removed and thankfully was benign, but it was a scare, and again it was the people at Orlando Health who gave me the strength to get through and to stay positive. I was so pampered and well taken care of, I really didn’t want to go home!

It was during my recovery from surgery that I decided it was time to retire. I had been with Orange County Public Schools for nearly 30 years, first as a teacher and then a principal. I knew I couldn’t wait any longer to pursue my passion, and after my recovery, I returned to continue my Orlando Health story — this time as a volunteer, this time to give back. And within a few months’ time, my “retirement” was over, and I became the volunteer coordinator for Orlando Health Orlando Regional Medical Center.

Today, I feel 100 percent healthy. What started out as a terrifying diagnosis for me turned into something that positively changed my life for the better.

I’m honored and proud to be a part of this organization as a team member, where I now get to do what was done for me when I was a patient. I could give a hundred examples of what people at Orlando Health do every day to make patients like me want to come back and do things for others the Orlando Health Way. From the minute you arrive, you feel like you are the only and most important patient. Every need is going to be met, regardless of how large or how small. At Orlando Health Cancer Institute, that is the care, support, encouragement and expertise that I experienced, from the very first minute. The experience changed my life in such a positive way; I’m doing more, enjoying more and making plans. 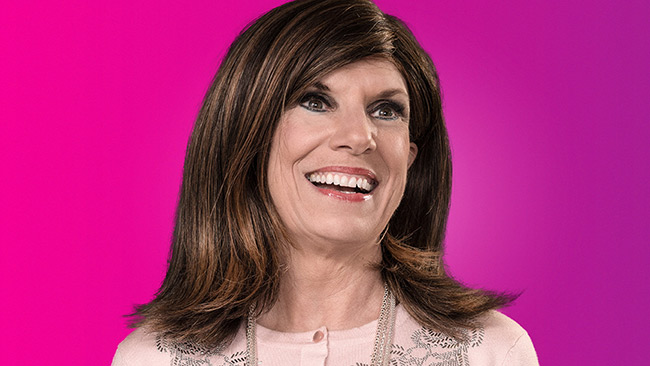 What started out as a terrifying diagnosis for me turned into something that positively changed my life for the better.