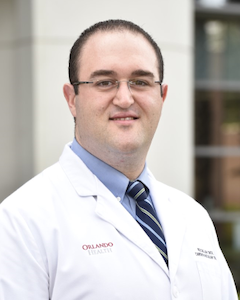 Dr. Rizcallah Deek grew up in Aleppo, Syria and moved to the US in 2011. He completed medical school at the University of Aleppo, Syria and his internal medicine residency at University of Central Florida/HCA Consortium in Orlando, FL where he served as one of the first home grown chief residents. Dr. Deek was part of the ASSUAGE-CKD trial group at Rush University Medical Center and John Stroger/Cook County Hospital in Chicago, IL. Now a cardiology fellow at Orlando Health, he plans to pursue his career in invasive cardiology. He is married and has 2 boys and enjoys spending time with his family, cooking and playing piano.

Information will update every 5 minutes. ER Wait Times are approximate and provided for informational purposes only. Estimated Wait Times as of: Tuesday, September 28, 2021 11:06 AM