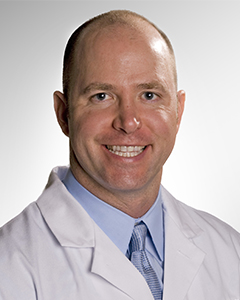 Brett Lewellyn, MD, joined Orlando Health as part of the Level One Orthopedics team in 2013. Dr. Lewellyn is board certified in orthopedic surgery by the American Board of Orthopaedic Surgery (ABOS), is a fellow of the American Association of Orthopaedic Surgeons (AAOS) and also has a “Charge of Added Qualifications” by the ABOS to practice surgery on the hand and fingers. Dr. Lewellyn’s areas of practice include all aspects of elective upper extremity orthopedic surgery extending from the shoulder to the fingertips. This includes sports related injuries to the shoulder, elbow, wrist, hand and fingers as well as chronic conditions such as arthritis in these same areas. In addition to his elective practice, Dr. Lewellyn specializes in traumatic injuries of the upper extremity including the hand and fingers. Dr. Lewellyn serves as the Director for Hand & Upper Extremity Surgery as well as the Assistant Program Director for Orlando Health Orlando Regional Medical Center orthopedic surgery department.

After serving on active duty in the United States military, Dr. Lewellyn earned his medical degree from the University of Vermont. Following medical school, he completed his orthopedic surgery residency here at Orlando Regional Healthcare. Dr. Lewellyn then completed a fellowship in hand and upper extremity surgery with the Florida Orthopaedic Institute in Tampa, Florida. Upon completion of his training, Dr. Lewellyn accepted a faculty position as the “chief” of the hand and upper extremity division of the orthopedics department at Orlando Regional Healthcare. In addition to his clinical duties, Dr. Lewellyn also currently serves as the Assistant Program Director for the Orthopedic Surgery Residency at Orlando Health and has faculty positions with the Florida State University as well as the University of Central Florida. He has helped develop and institute the orthopedic surgery curriculum and is directly involved with the daily training and education of our orthopedic surgical residents. In addition to other accolades, Dr. Lewellyn was recently honored by receiving the Attending of the Year award in 2016 and 2020. Dr. Lewellyn is also active in research including various prospective and retrospective studies focusing on ailments and injuries of the upper extremity and also serves on several integral committees for Orlando Health.

Information will update every 5 minutes. ER Wait Times are approximate and provided for informational purposes only. Estimated Wait Times as of: Thursday, May 19, 2022 2:28 AM